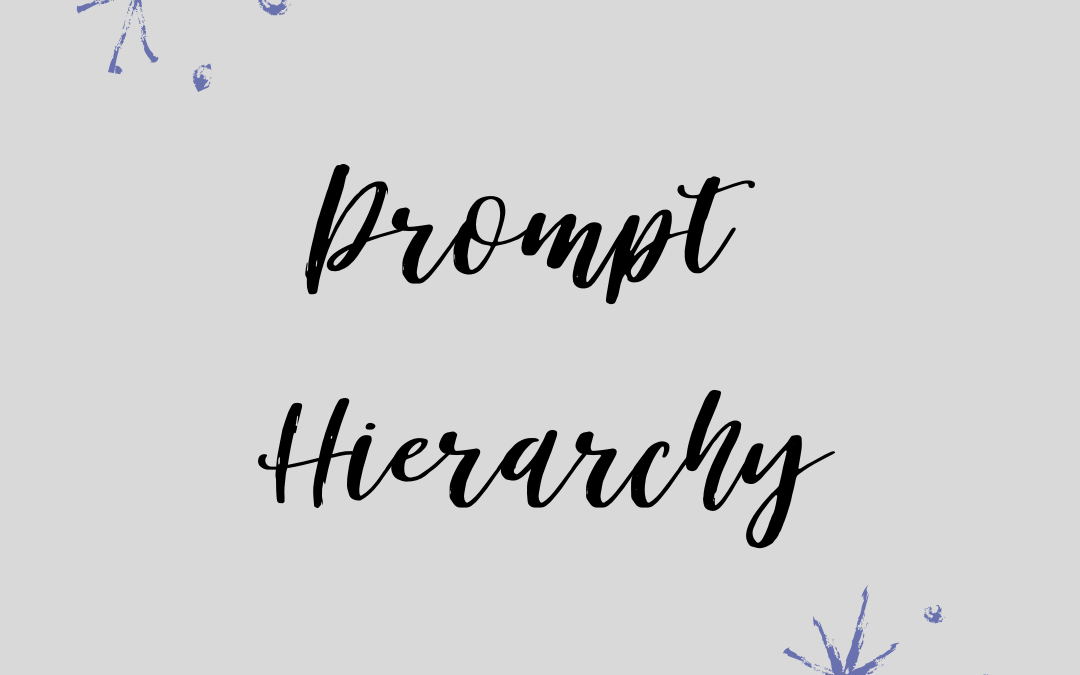 Prompt Hierarchy – A tool for your AAC Toolbox 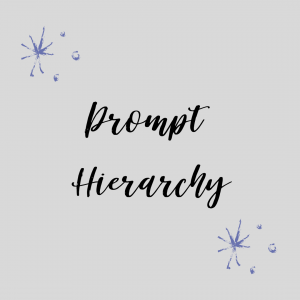 Hello again! If you’ve read my other blog posts you should now be familiar with AAC, Core and Fringe vocabulary as well as the “what”, “why” and “how” of modeling language with AAC. If any of this is unfamiliar to you, pause here and head over to my other posts on those topics, to learn or refresh your memory and then come on back to this post.

Now that you are excited and ready to show off your AAC modeling skills and let the world know what a “super-modeler” you are, I have one more tool for you to add to your tool box! This tool is multi-functional and can come in handy in any and all situations where you will be or are modeling core vocabulary and AAC. The tool that I am talking about is the Prompt Hierarchy.

I think I may have gotten a little ahead of myself – are you wondering what a prompt is? Let’s take a minute to review that so that we make sure we are all on the same page. Prompting can be defined as: “a strategy used to assist, suggest or cue someone in order to help them learn a new skill” – such as using an AAC system for communication. 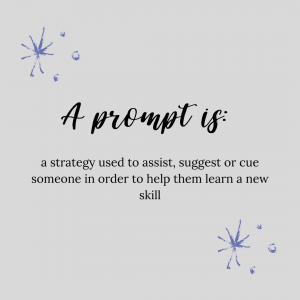 A prompt is: a strategy to assist, suggest or cue someone in order to help them learn a new skill.

We all need prompting to learn a new skill – people were there to help and prompt us to learn to walk, to learn to cook, to learn to drive, etc., – these were not skills that we picked up on our own. We needed someone there to help us along, providing opportunities for increased independence as our skills improved until we were able to do it completely on our own. We can use the same ideas to help our AAC users develop their independence in their communication and use of their AAC system.

We all need prompting to learn a new skill.

You probably used some of, or all of these prompts: gestures (e.g., pointing, reaching, showing, etc), 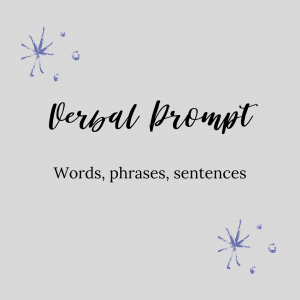 visual (e.g., looking toward items, objects, places, providing something for them to look at/reference, etc), 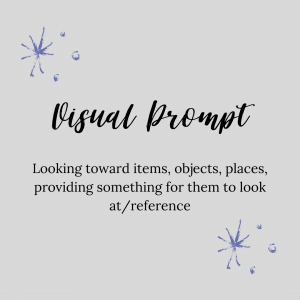 Visual prompt: looking toward items, objects, places, providing something for them to look at/reference

and/or setting up the environment to encourage the skill be attempted or completed. We can, and should, use the same types of prompts for our AAC users as we facilitate their learning how to use their AAC systems effectively and efficiently.

Ok, now that we are on the same page about what prompting is, the different types and the fact that we all need some every once in a while, let’s chat about the Prompt Hierarchy.

As with core vocabulary communication boards, there are many different versions of Prompt Hierarchies out there, and the one that you use is more of  a preference, however they typically include the same steps. The organization of the steps may be a little different however, depending upon the version of the hierarchy.

Oh and don’t let that word “hierarchy” trip you up – it’s just a fancy way to explain how things are organized or ranked.

Throughout this post, this is the Prompt Hierarchy I will be referring to. 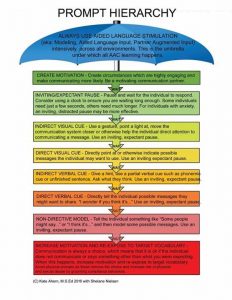 It moves through various levels of prompting from the least amount of prompting to the most. I will highlight each level of the hierarchy, providing examples of what prompting at this level might look like.

It is important to know that you may work through this hierarchy in its entirety multiple times within an activity and that’s ok. We are not expecting a student to learn a new skill and how to complete it independently after a single exposure. It may take many times before students start to demonstrate the ability to complete part or all of the task themselves. Another important aspect of this hierarchy that I want to make sure is highlighted is the emphasis on providing wait time between each level of prompting.

Sometimes, AAC users need increased time to think about, process and comprehend what they hear and see. Therefore, it is vital that we intentionally provide time for the students to process the information that is presented to them and give them a chance to give some information back in the form of actions, words, etc before we move forward. This will be demonstrated as we move through the explanation of each step within the hierarchy. 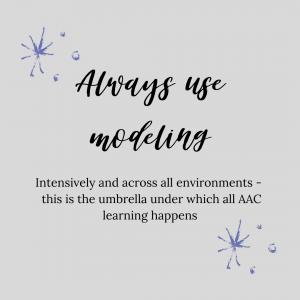 Always use modeling: intensively and across all environments – this is the umbrella under which all AAC learning happens.

At the top of this hierarchy is an umbrella stating “Always Use Aided Language Stimulation” or “Modeling”. The umbrella image signifies that this skill, of modeling language using AAC, is the umbrella under which all AAC learning occurs and that modeling language via AAC should be happening all day, every day and throughout each step of the prompt hierarchy.

The first step of the hierarchy, which uses the least amount of prompting, is “Create Motivation”. 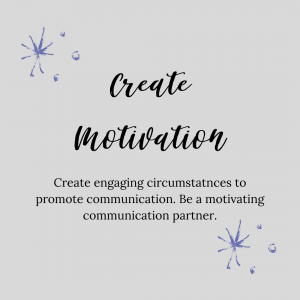 Within this step, our job as the communication partner is to create environments and activities that are highly engaging and motivating for the student. When students are engaged and motivated they are more likely to want to interact and/or communicate.

This motivation does not have to be only within the physical environment or with a physical item. It can also be with you, solely as the communication partner. Yes, you can be motivating and engaging, without anything else, just you. More stuff doesn’t always make things more motivating for students.

So, after you have created motivation and engagement for your students to encourage them to communicate – what do you do?You WAIT! I recommend counting, slowly and in your head, for at least 5-15 seconds or more (some studies suggest waiting up to 45 seconds) to provide the student the extra processing time that they may need.

If the student doesn’t initiate communication after you have provided ample wait time or if during the waiting time period it seems as if they are becoming disinterested in the activity, continue on with the next step in the prompting hierarchy.

The second step within the prompting hierarchy focuses on increasing the wait time that you provide for the student while still encouraging them to communicate or respond to your communication attempts through providing an “expectant pause”. 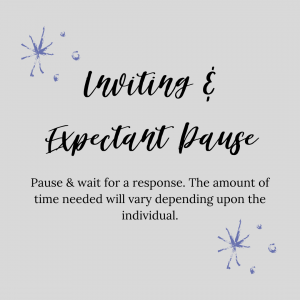 Inviting & expectant pause: pause & wait for a response. The amount of time needed will vary depending upon the individual.

After the addition of this step – guess what you do? That’s right – you wait again – remembering that waiting is giving your student’s important time to process and think.

The third step within this prompting hierarchy is providing an indirect visual cue. 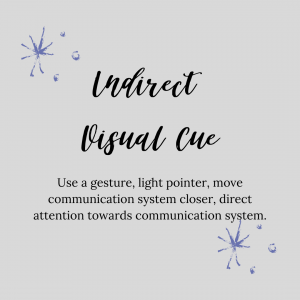 After this step, wait to see if the student responds and initiates communication. If not, proceed onto the next step in the hierarchy.

Remember, as we are progressing through these steps we are gradually moving from providing the least amount of prompting, promoting the most independence for the student, towards increasing the amount of prompting to help the student successfully initiate and/or complete the skill they are learning, in this case, using their AAC communication system.

The fourth step in the hierarchy is to provide a direct visual cue for the student. 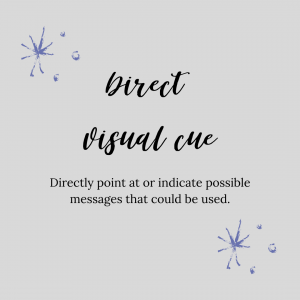 Direct visual cue: directly point at or indicate possible messages that could be used.

This is where you show the student possible messages that they could use within the activity, environment, etc.This can be done through physically touching various symbols on the communication system, hovering your finger around certain symbols or areas on the communication system that you feel could be messages that the students might want to use and/or communicate. Again, this step is paired with an expectant pause and look as well as,-you guessed it,- waiting time for processing and thinking by the student.

The fifth step is providing an indirect verbal cue. 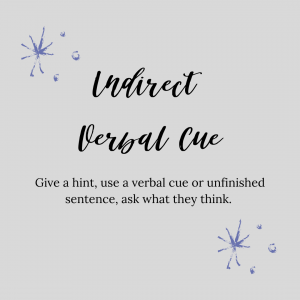 Indirect verbal cue: give a hint, use a verbal cue or unfinished sentence, ask what they think.

Indirect verbal cues can be hint, such as “What do you w___?” to ask the student what they want, while pointing to, or near, the symbol “want” on the communication system. Another example of an indirect verbal cue can be an unfinished familiar sentence or phrase such as “Ready…Set…____” and leaving wait time and an expectant look for the student to attempt to fill in the last word to complete the sentence or phrase.

I just mentioned it again but I bet you are sensing a pattern by now. After this step, make sure you leave some wait time before moving onto the next step to see if your student will initiate a communication interaction.

The sixth step is a direct verbal cue and involves directly telling the student possible messages that you think they might want to share that are applicable to the activity/environment. 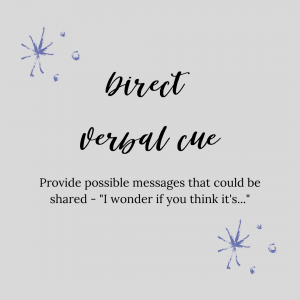 Direct verbal cue: provide possible messages that could be shared – “I wonder if you think it’s…”

This can be accompanied by saying things like “I wonder if you think it’s ____” and then modeling on the communication system different options that the student could use within the activity, routine, environment, etc. This is, as always, followed up with and paired with wait time and an expectant look.

The seventh step in the hierarchy is the non-directive model. 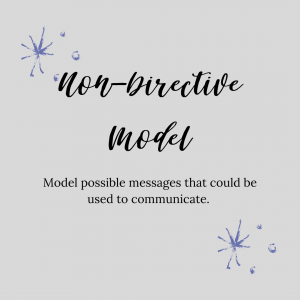 Non-directive model: model possible messages that could be used to communicate.

Notice I didn’t mention hand over hand assistance as we moved through each step. Taking a student’s hand and moving it for them to touch and/or activate the communication system is not advisable. The strategy of actively modeling language via AAC for students has been proven, through research, to be more effective than hand over hand and physical prompting.

We want AAC users to know that their voice is theirs and that they are free to communicate whatever they want. By taking their hand and physically leading them to what  to say, it can be interpreted that we are telling or directing the AAC user as to what they need to or should say.

The strategy of actively modeling language via AAC for students has been proven, through research, to be more effective than hand over hand and physical prompting.

If you have moved through the entire hierarchy and the student has not yet imitated or initiated any communication attempts – that is OK! Remember the umbrella that is over this whole hierarchy – the strategy of modeling language via AAC! Throughout every step, you were modeling and providing aided language input for the student – you were demonstrating ways that they could communicate throughout the activity. Remember that modeling is about what we as the communication partners do and not about what the students do.

I want to leave you with this – to communicate or not is always a choice – we can not and should not try to force anyone to communicate. It is perfectly fine if they don’t want to communicate or if they say something different than what you were expecting. Expect the unexpected and honor all communication attempts!

Now that you have added this new tool to your toolbox make sure you use it! A copy of the prompting hierarchy referenced throughout this post can be found here for you to save, print and share. As always, if you have any questions at all, please feel free to reach out via email or in the comments below. Don’t forget to subscribe to the SENSEable Literacy email list to be notified of new blog posts, videos, and  more!